9 Things to Do BEFORE School Starts!

Hey Parents! A successful school year begins before the first day of school. Don’t stress! We have you covered with these 9 simple steps:

Especially, if this is a new school! Locate their classroom and make notes about the seating arrangement. If your kid goes to several different teachers during the day: walk their entire schedule with them. Noting the arrangement and “feel” for each class. It is suggested to do these things even if it is not a new school because it will at least be new teachers and classrooms.

END_OF_DOCUMENT_TOKEN_TO_BE_REPLACED

Your Kid’s a Liar

In today’s political climate, it seems everyone lies. They even have a website to show just how much each presidential candidate actually lies. So, you are probably wondering why people lie and if there is ever a good time to lie? The answer is a little more complicated than you might think. See, none of us are perfect. We cannot expect our children to be, either. If you want your child to be more like Hillary, Barack, and Bernie, and less like Trump, Pence, and Ryan… keep reading. 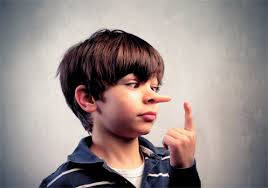 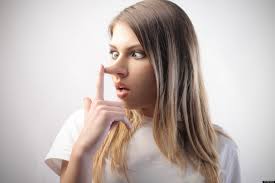 First let me say,  ALL kids lie. But everyone lies for different reasons. Yes, there are reasons people lie and if we can figure out the WHY, we can usually nip it in the bud. Some children with ADHD, ODD, and other behavioral disorders lie as a symptom of their disorder. That is not to excuse the behavior, it is just a reality. Their tendency to make mistakes has them thinking they need to cover it up — kids with these issues are especially prone to fibbing. How should you respond when you catch your children in a lie? The most important thing you can do as their parent is to be proactive, not reactive. I’ll expound on this more later. Use the tips below to help your child recognize the importance of telling the truth, and nothing but the truth.

The impulse to tell lies does not make your kiddo a bad person, nor is it evidence of a character flaw. They are not inherently bad, so don’t start picturing their future jail cell. It can be a byproduct of ADHD, or ODD, or Bipolar Disorder. But as with other symptoms of these disorders, it usually improves with medication. But even with pharmacotherapy, your kid may need some extra coaching to understand the importance of telling the truth.

Some kids tell lies out of feelings of insecurity, concocting fanciful stories in an effort to make themselves seem cooler to other kids. If this is your kid’s reasoning, punishing them could be counterproductive. Instead, make sure they understand what will happen if they get caught in a lie. The downside of telling a lie — even a really small one — may be obvious to us, but kids need to be reminded that lying usually causes more problems than it eliminates.

If your kid suffers from any of the disorders we mentioned earlier, they may be prone to blurting out answers to questions. Because they have not thought out the question, the “answer” could range from semi-true to liar-liar-pants-on-fire. Teach them they do not need to be the first one to answer and the answer does not have to be instant. Have them think about the question as they count to 3, “1, one thousand, 2, one thousand, 3, one thousand.” If they come up with the correct, truthful answer, they may answer the question. This is ensuring your kid knows that answering truthfully and accurately is more important than a timely response.

Be Proactive, not Reactive

If your child says something you know to be untrue, stay calm. Reacting angrily, or with obvious dismay, or disgust, will only make your child feel the need to tell additional lies to defuse the situation. This is actually a survival technique. They fear they are in danger (not that you have beaten them but that they are in trouble) and want to get out as quickly as possible. Be proactive. Give them a free get-out-of-jail card by allowing them another chance to come clean without repercussion.

Give your kid the opportunity to reconsider their answer. Allow them one free get-out-of-jail card with another chance to come clean without consequences. “I’m not sure that’s exactly how things went. Do you want to try again? You get 1 free do-over…” This teaches children to 2nd-guess a misleading answer.

You will notice that children often lie to cover up mistakes, or misbehavior. This can be tempting to hand down a bunch of consequences. But working towards increasing positive behavior, studies show, is more reinforcing. Therefore, “catch them being good” and reward them for their honesty. This will make it more desirable to tell the truth, thereby decreasing dishonesty.

Explain the socially appropriate use of very small lies to prevent undue harm to others. For example, if they received a gift they did not like from someone in their class. Ask which response they would most likely give:

If your child (naturally) picks C, give them a high five! Be sure to explain why that was the correct choice for the situation. If they answer with A or B, explain how the friend’s feelings might be hurt. Furthermore, that it is not harmful to lie to save someone’s feelings in certain social situations. Emphasizing that this is the only acceptable exception.

Let’s Review, when your kid lies:

Take a look at RxP’s 2nd page of apps: The following Medical apps are listed:

Medical Apps that Save Time and Lives

Yesterday, I told you about Epocrates. It has been a god-send since I started using it. **See my original post to see what I like and dislike about that particular app**

Today, I want to tell you about a few (okay a lot of) other medical apps I use on a regular basis. Most of them are free, so why not?! Here are some screenshots of my iPhone’s RxP (Rx=Medical Psychologist) Medical App folder.

As you can see, I have collected quite a few. I would say they are pretty much in order of importance from left to right screenshots. Inside each screenshot, I tend to position the apps I use more frequently in the middle and corners. Don’t ask me why, it’s just how my brain works. (And yes, that’s my little boy in my background image. He just turned 1!)

The 1st page (far left screenshot) you will see: In today’s tech-savvy market it’s out of the ordinary if you are not using medical apps in your every day practice. So, I am sure most of you have either seen and/or used the medical/prescribing apps mentioned below. However, just in case you have not and are still grappling with which ones to actually purchase, here is a no-frills review of Epocrates: 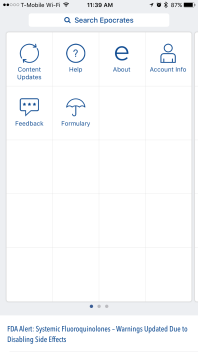 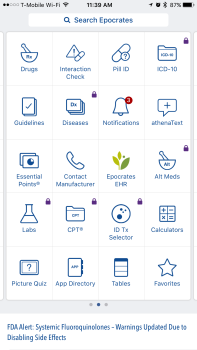 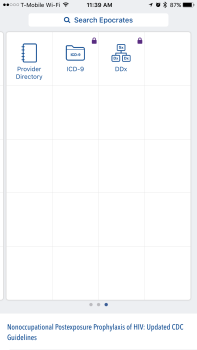 Most of the time, I hate stats. It’s one of my least favorite subjects. Frankly, I think most people would agree. But, it’s a necessary evil in this field. So, I put together a few points of logistical relevance so you don’t have to go ballistic on this stuff!

1-Even in a double-blind study, reported side effects can tip off the clinician as to whether the subject has received the placebo, or the actual treatment.
2-The placebo effect-is shown when a sugar pill is given to the control group and can lead to positive (and less likely negative) symptoms just simply by receiving something from a clinician. This speaks to the power of the mind.
3-Our mind can work against us, too, with the nocebo effect-setting someone up for possible negative side effects by telling them that “you may get all these side effects, or symptoms: lupus, scleroderma, blurred vision, dry mouth, and left foot paralysis.” It never fails that someone will report left foot paralysis!! As you may know there is not a single drug That’s the power of suggestion!
4-Here’s a great tip when deciding whether to read a study, or not. If your confidence interval is <1.0 it IS statistically significant!! If it includes 1.0, don’t read the study because it is NOT statistically relevant.
5-Risk ratio-is the point estimate used for cohort studies.

Q: What’s the difference between a psychologist, a psychiatrist and a medical psychologist?

Haha, there has to be a joke in there somewhere!!
But, for real, this is a common question I’m asked when I tell people about the psychopharmacology program.

A: The simple answer is:

A: The complicated answer is:

A psychologist has a minimum of the following:

source:
Please also refer to my other post discussing the requirements that a licensed psychologist must meet prior to licensure.

A psychiatrist has a minimum of the following:

Okay, here is where it gets a bit confusing…

A Medical Psychologist can be a:

1-highly trained and licensed psychologist
WHO CAN PRESCRIBE PSYCHOTROPIC MEDICATIONS:

2-highly trained and licensed psychologist
WHO CANNOT PRESCRIBE ANY MEDICATIONS

CONCLUSION:
The lines between psychiatry and medical psychology are becoming blurred. Though, they are admittedly VERY different fields with different qualifications and degrees. It is this author’s belief that the blur happens from a variety of sources: depictions on television and other media outlets, misinformation, miseducation, interpretation and perception. But, the most important blur is occurring due to the nation-wide scarcity of prescribers, in general! You may have noticed the increasing amount of Nurse Practitioners, Physician’s Assistants and dun-dun-dun-dun-duuuuun… Medical Psychologists!

Hope this clears up some misinformation, or confusion. Thanks for reading.

I started this blog because…

I want to hold myself and other  colleagues accountable for learning and implementing the material we are learning in our Post-doc Master of Science in Clinical Psychopharmacology so that we will pass the Psychopharmacology Examination for Psychologists (AKA PEP) the first go-round.

Here is a brief introduction to what the heck all that means!

A Post-doc Master of Science in Clinical Psychopharmacology is a post-doctoral degree that can only be obtained when the following prerequisites have been met:

I hope this gives you a helpful introduction to the field of medical psychology, prescribing psychology, psychopharmacology, or otherwise known as pharmacopsychology — more on this next time!

Thanks for reading!
Sharing is caring,
Dr. Jen Chandler